In celebration of Women’s History Month the MFF Team gives a big shout-out to some seriously bad-ass females in fitness. Just a few of our favorite lady Ninjas…

Andrea Ducane
Andrea Ducane is a bad-ass kettlebell mamma who has more than 20 years experience in the fitness industry. She travels around the world granting kettlebell certifications and is the embodiment of a true Ninja. Plus, she does fierce splits with kettlebells! Come on!

Wojdan Shaherkani
Possibly the most literal Ninja on the list is Wojdan Shaherkani. She represented Saudi Arabia in the 2012 London Olympics, competing for the gold in judo. Not only could she kick Kyle Langworthy’s ass, but this 16-year-old was the first female Olympian from Saudi Arabia EVER! No doubt she had to overcome an insane amount of adversity to represent her country. So much glory! #strongwork

Jane Fonda
At the Ninja Clubhouse, we fondly refer to glute bridges as “Jane Fondas” but there is no joking around when you consider the big steps Jane Fonda made in the fitness industry. After breaking a foot during filming a movie, Jane Fonda took up aerobics to stay fit. She ended up releasing a book and 23 workout videos, connecting lots of women to working out through their VCRs. Her videos sold a total of over 17 million copies worldwide. She single-handedly made fitness accessible to millions of baby boomers across the country. Have you seen her lately? She still looks fabulous.

Elise Serafin Luftmann
We plucked this one from the history books. From the German-speaking region of Bohemia, Elise performed weightlifting all over central Europe. Famous for her ability to lift heavy weights and to juggle cannonballs in the early 1800’s, she helped to challenge the idea that being a female was synonymous with being weak. Elise is featured in a new book on the history of muscular women called Venus with Biceps that might find its way onto the Ninja Book Club reading list. 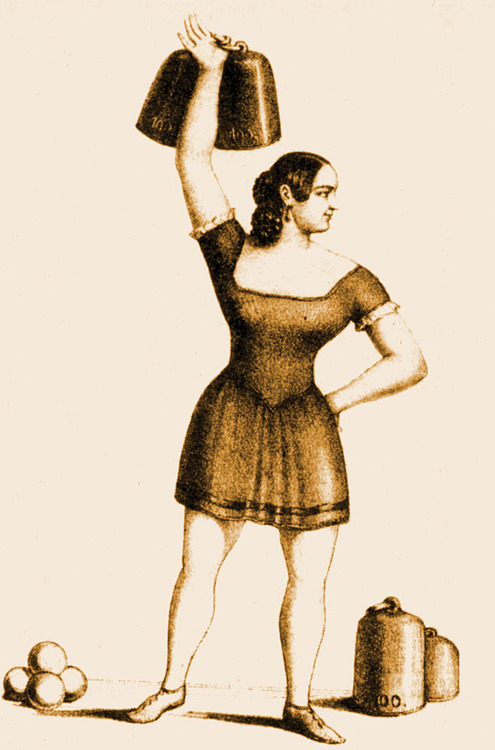 Girls Gone Strong
A longtime friend of MFF, Neghar Fonooni is a co-founder and writer for Girls Gone Strong. Offering fitness and nutritional advice and inspiration, GGS has started a national movement of women who like to lift heavy and are walking examples of the amazing results. A constant source of inspiration to lady Ninjas at MFF, the Girls Gone Strong are changing the way women perceive working out and integration of fitness into day-to-day life. #nailingit

This list could go on for days and days because so many incredible women have contributed and continue to contribute to the world and health and hotness. Who are your favorite female Ninjas? What women have been role models or inspiration for you?