Let’s talk about shame, shall we?

Specifically, I’d like to address the shame folks feel when they fall off the fitness wagon.  Fitness, like most of life, is rarely a linear pursuit.  When seeking to make health and hotness lifestyle into a habit, it’s only natural that there will be fits and starts.  Unfortunately, all too often, people give in to all-or-nothing thinking and long delay their return due to embarrassment.

This is too bad, as irregular patterns are entirely normal when folks inch towards making fitness part of their life.  It’s rare for someone to start working out for the first time and never fall off the wagon.  And I’m not even talking about the ebbs and flows of in-it-to-win-it 5 times a week and the barely-maintaining 2 times week.   I’m speaking about working out consistently for 2 months… and then taking an unexpected 3 month complete hiatus from fitness. 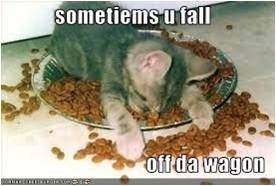 Now is this ideal?  Maybe not.  Is it normal and something that happens to many people?  TOTALLY.

I myself experienced much the same thing my first 5 years of training.  From the time I picked up my first weight just before my 18th birthday until the summer of my 23rd year, my fitness adventures were sporadic at best.  Due to the hectic schedule and relative poverty of my early twenties, those first five years were characterized by 6 months on, 3 months off, 1 year on, 9 months off, 6 weeks on, 6 months off, etc.

Again, is this ideal?  Nope.  But it happens.  It’s actually pretty normal!  The people who are able to totally overhaul their lifestyle in one fell swoop are few and far between.

All too often, I see Ninjas get jazzed about working out, go all in for a few months, then start to backslide a little bit, and fall off totally.  This wouldn’t be a problem in and of itself.  Shit happens, life happens, new jobs happen, we get it.  Unfortunately the Ninja in question often compounds the issue with shame.  Shaaaaaaaaame.  SHAME!!

Now, instead of coming back when they’re ready, they push it off because they’re embarrassed.

“What will the trainers think?  They’ll judge me because I’m weaker now.”

“What will the other Ninjas think?  I’ve gained some of the weight back.”

“I can’t bare to start all over again as square one. I’m so mad at myself for throwing away all that hard work I did.  I guess I’ll eat this burrito and watch Real Housewives of Guam…”

NINJA!  You are not alone!

Here are some things to keep in mind if and when you find yourself in this position.

You’re not as far gone as you think.  You did NOT waste all that work.  The knowledge gained is still there.  The tricks and strategies for training and nutrition are just waiting for you to employ them again.

Furthermore, since you’ve already laid the foundation once, you’ll have to do less brain-work since you already have a lot of knowledge. Oftentimes, you’ll be able to layer on new and even better strategies now that you know more about how your body does (or does) not respond to certain training modalities or nutritional principles. It’ll take much less effort to use the recipes you had already mastered, which means now you’ll be able to spend time expanding your healthful culinary repertoire!

3)      Your body will be happy to get back to where it was, and probably will do so quicker.  While repeated bouts of crash dieting seem to negatively affect metabolism and slow down future weight loss efforts, if you did it the right way in the first place, your body may be more responsive than you think.

And for exercise, this goes double.  You may have lost some strength and endurance, but it’s not uncommon to find even better technique after having take some time away.  Now if you’ve taken months and months off, you should expect a little bit of lag time as you dust off your neural circuitry. That said, once again, you are NOT back to square one.  Far from it.  You’re much better situated than when you first began and a new peak of health and hotness is closer than you think!!

And if you happen to be a Ninja and you feel like I’m talking to you personally… I probably am talking to you.  Yeah, you.  While this information applies to gym-goers everywhere, MFF is not a normal place (SAYS CAPTAIN OBVIOUS).  Anyone who lives dreams in a Ninja Clubhouse is part of the fabric of the Ninja Army forevermore.  You are valued.   You are missed.  You will find you will be welcomed home with open arms.

Seriously.  You’ve been away long enough.  Come baaaaack.  No one is going to judge you.  We’ll just be happy to see you.  You’re totally normal and it’s not at all uncommon to “accidentally” take an extended break.

As always, you do you. No pressure. We respect your right to be the captain of your own fate.

But the unicorns miss you and we long to hold you.  See you sooooon!!