Somewhere along this journey to health and hotness, I decided that if I were going to indulge in ice cream once in awhile, I was going to eat “the real thing.”  I used to get the “low fat” versions all the time – “Skinny Cow” was my favorite. I used to examine the box carefully and I would calculate, “One drumstick is only 150 calories and 3 grams of fat!” Then I calculated what the macros would be for two, which is inevitably how many I would have.  (For the record, I could have eaten the whole box. Ok I may have. Once.)  Trying to do an overhaul on myself, I gave up low calorie “fake” desserts when I started Snatched. There were many more healthy choices to be had…and anyway, who ever heard of a skinny cow? (What kind of oxymoron do they take me for?)

Eventually, after months of making a habit of healthy eating, I decided that I could eat real ice cream once in awhile without going into any downward spiral.  I agreed to abide by a certain set of rules, like not keeping ice cream in my freezer, but to go out once in awhile for ice cream wasn’t going to be the end of the world. In fact, it was a good thing. I learned first of all, that ice cream is fucking delicious. In its true form, it is creamy and refreshing, without being overly sweet. And honestly, those real ingredients are pretty satiating.  Eat the ice cream. Done. No multiplication involved. Not even checking the macros.

This was all great, until a seemingly endless heat wave hit New York City in July of 2013. If ever there were a call to ice cream, this was it. One steamy night after having my ass kicked in exercise class, I emerged from the sweltering subway wanting ice cream. But this time, I really didn’t want to indulge in that Häagen-Dazs, as I was carefully watching my macros.

I kept hearing about Arctic Zero. Low in calories and carbs, high in flavor and coldness.

I hadn’t tried it before, because, as I said, when I want ice cream I just eat real ice cream. But it was soooo hot, and I really did not want to have real ice cream at that particular moment. Besides, with no end in sight for this heat, I might want this every day. So I decided to give it a try. I stopped at Fairway and grabbed a pint of Chocolate Mint Cookie. 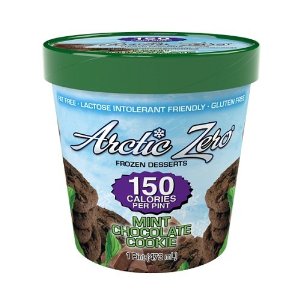 When I got home, I took a look at the carton. In bold print, under the name, was the declaration:

And then on the back:

Do you ever have the urge to eat the entire pint?

With only 150 calories per pint, Arctic Zero allows you to indulge your senses!

My eyes brightened, “Whoa! That’s AWESOME!” and I got out a spoon and opened the carton.

Wait… Why are they telling me to eat the whole pint? I took a look at myself… pint of AZ in one hand, spoon in the other, and I thought for a moment. Did I really want to eat the whole pint? No, not really. Huh. (I didn’t even know if I liked it at that point.) Sure, it’s great that the calories are low, but I had to take pause and think about why are they marketing it to me like I am supposed to eat the whole pint? And hadn’t I spent months trying to get away from that very mindset? Just because you can, doesn’t mean you want to…but the Arctic Zero carton seemed to be telling me something else.

In the interest of full disclosure, I am a person who has some food issues.  In trying to take control over some of these issues, I’ve discovered that I become dependent on certain foods, particularly ones that I know I can have because they aren’t really unhealthful, and they are low in calories, fat, carbs. These tend to be packaged foods, marketed as low fat replacements for “the real thing.” They hold no nutrition, and, frankly, they get inside my head.  And for me, that’s a red flag.

A great deal of what I learned deals with the thought process behind how we can end up in a difficult cycle of bad eating habits, even while we think we are being good to ourselves by eating those low calorie packaged treats. This is why I don’t eat them anymore. In a strange way I feel more in control eating the real dessert every so often than I do eating the “fake dessert” every day. CLICK TO TWEET!

I mention all this because I am particularly sensitive to when food companies are promoting bad eating habits under the guise of trying to help us lose weight.  And now, the Arctic Zero people were marketing to me so that I didn’t even think about eating less than a pint. In fact, I didn’t even think about putting it in a bowl. I looked again at that pint of Arctic Zero, and in spite of it being only 150 calories per pint, I had to wonder: 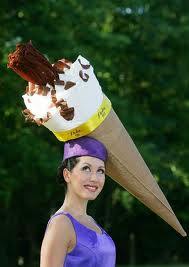 Speaking for many with food issues, I can’t help but think that Arctic Zero may not have our best interest at heart. Isn’t this kind of mindless eating that I was about to engage in a primary behavior that I worked so hard to avoid? I might even go as far to say that this eating of an entire pint of Arctic Zero, simply because the carton said I could, was in fact more dangerous than eating even a random pint of Häagen-Dazs.

I put down the pint. Fuck you, Arctic Zero! I don’t think I want to eat the whole pint of this. I think I am going to scoop some into a bowl and eat that and see what happens. And I did. It turned out to be just enough. I finished the pint over a couple of days, and while I admit to enjoying a refreshing treat during those hot days, I’m not sure that I like having a “substitute dessert” around all the time. While I can afford the calories, I am intent on keeping food on the plate and out of my head.

My purpose is not to destroy the joy of eating that pint of Arctic Zero. I get it. Sometimes you do want to eat the whole pint and not worry about ruining your calorie plan. What I have a problem with is that the Arctic Zero people are assuming that we are people who are more interested in eating a pint of ice cream substitute simply because the calories are low, rather than eating a sensible portion of the “real thing.” While this kind of marketing appeal solves the macro problem of indulging, I am fairly certain that it perpetuates bad eating habits, specifically, eat lot of something just because you can.  If you are a person who is prone to food issues, or who is trying to change your mindset about food, this can be a slippery slope (or in this case, slippery spoon).

As for me, I am not saying that I’m never going to eat Arctic Zero again. (The chocolate mint cookie flavor is kind of nailing it.)  I simply offer this to anyone who has issues with food: Tread carefully. With the low calories and relatively low sugar, etc., Arctic Zero is probably not going to mess with your macros if you are keeping track. Just make sure it doesn’t mess with your mind.