Relaxxx pumpkin, it’s not coming that fast. In fact, if you’re not resting during your workout, you might be slowing yourself down. (TWEET THAT SHIT!)  You see, rest is an integral part of the process. There’s an art to when and how you do it.

Most of what we do in our journey of health, hotness, and happiness is about matching our behaviors to our goals. My last article was a reminder that allowing for recovery between workouts is essential for success. Today we’re going to talk about the importance of recoveryduring the workout.

Why Do We Rest?

If resting between workouts is about pulling off the highway to eat, sleep, and sex shower before your journey continues, then rest between sets is about pulling into the rest stop to shake out your legs, run around the car, and top off your tank. In reality, it’s about energy systems. Here’s a sexy chart! 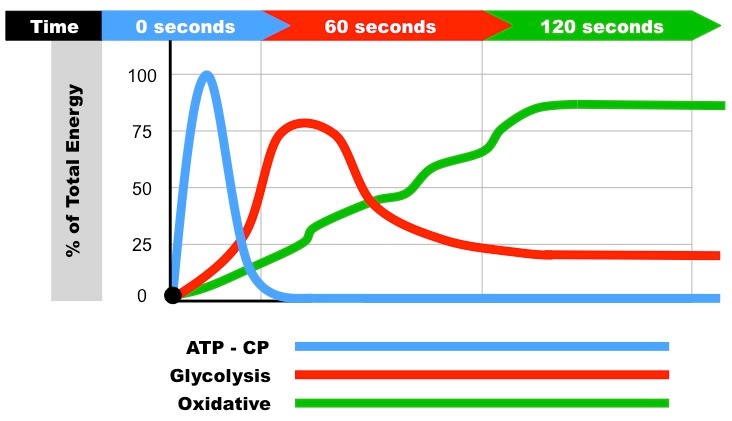 At the moment fitness land agrees that metabolic resistance training (MRT) is the best tool for creating rapid physique changes. The kettlebell swing is our go-to example of what lifting weights faster can do for your body. While using an appreciable weight for a set of 20-60 seconds on its own lets us focus on getting stronger, it’s how we combine and recover from these sets that lets us focus on better fitness.

Our adaptable body has the ability to seamlessly move between these interval systems. As cardio-with-weights becomes increasingly popular, many programs focus on the idea of always doing more work, flashing some graphs, and showing you that the highest point is where you want to me. A typically un-spoken rule at MFF is that while the work periods of class focus on the ATP-CP and Glycolysis energy systems, the rest periods focus on the oxidative energy system. (You can see why it’s unspoken.)

Wait…if it’s a rest period, how am I using energy?  You’re still breathing hard, aren’t you?  Thought so!

This can best be appreciated in programs that offer distinctions between more “strength” based days and “cardio” based days. In reality, the differences between these are rather small, considering that the possibility exists to go a much heavier weight for several reps using a barbell, and that even-paced swimming, running, or cycling can create a more potent aerobic effect. Accepting that at MFF we’re getting the most of all possible worlds, let’s consider how you can maximize these benefits.

A class that emphasizes lifting some heavy shit throughout its duration is best realized when the focus is actually on lifting heavy shit. At MFF, this is our Superhero Strength Class. Since the focus is about getting stronger, rest periods are best spent not working hard, or resting, to allow for adequate recovery before continuing. This may mean resting entirely, exchanging one ‘bell for a heavier one, or reinforcing desirable movement for the upcoming set with a mobility ‘filler’. Here’s my favorite example:

A class that emphasizes conditioning, or anaerobic work capacity, is often best realized by fully appreciating the work periods, while allowing rest periods for recovery. Wait—isn’t that what you just said?Yes, precisely. Often a class that’s more cardio driven, which is Kick-Ass Conditioning at MFF, will be structured to include more time working and less time resting. Consider that the rest is built in, and utilize the few free seconds to sip some water, take a focused recover breath, and cue your mind for the upcoming set.

Okay, I get it; it’s the same thing; we’re supposed to rest.

Yes, but it’s not that simple. In both cases, rest periods give your oxidative energy system more time to recover. That’s why you’re still breathing hard!  Assuming that your workout is structured to allow for the intended recovery, let’s talk about what you can do during those breaks.

The first and simplest thing to do during rest periods is to actually rest. Grab a sip of water, high-five your friend, checkout dat ass in the closest mirror. All go and no low can wear you down pretty quickly.

Another option is to strategically have active rest. This may be a low-level recovery exercise like the standing Cross-Crawl, which we like to call “Brain Candy” because of how it excites the motor centers in our brain. It may also be a movement that can make the next set even better, and is typically a mobility drill. Maybe you use the Cook Squat that we discussed earlier, or perhaps it’s the thoracic bridge below. Be sure to pick something that complements your focus on the upcoming movement.

There also exists the option of doing more demanding exercise, with jumping jacks being the most universal example. This is a great way to keep your heart rate up, throw a big “F%&k you!” to the rules of recovery, and keep on your merry way. It’s totally an option, but don’t fall into the trap of thinking it’s the only one. Often, we see betterresults by allowing our body recovery time, grabbing a heavier ‘bell, and allowing ourselves to make it feel easier. 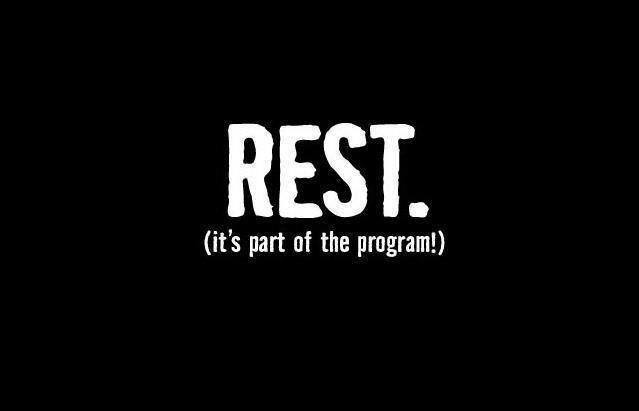 Rest periods in your workout can be completely ignored, used for active rest that improve your long-term results, or used to pick up a date for Monday night. The decision is yours, but I will postulate that doing the opposite of what you’re accustomed to will help you get that much better. As humans we’re drawn to what we’re good at, and often we need the opposite to truly transform. (TWEET THAT SHIT!)

Respect that rest periods are part of the program, and that allowing yourself time to recover is part of the process. Just as we may need a day of easy exercise to help us recover, we often need a few seconds to take a deep breath and think about being awesome before getting after it again.