It’s all Greek to Me

When I look at the yogurt section in the grocery store, there are a million choices. Most of them are Greek, and all of it is overwhelming.  Greek, full fat, low fat, nonfat, plain, fruit on the bottom, blended, fruit on the side, flip.

Greek yogurt is definitely the star in the dairy aisle these days.

What exactly is Greek yogurt? If we want to talk semantics, then Greek yogurt is yogurt that’s made in Greece. (There is no FDA or industry standard for what defines Greek yogurt, so it’s all Greek to the dairy industry also.) 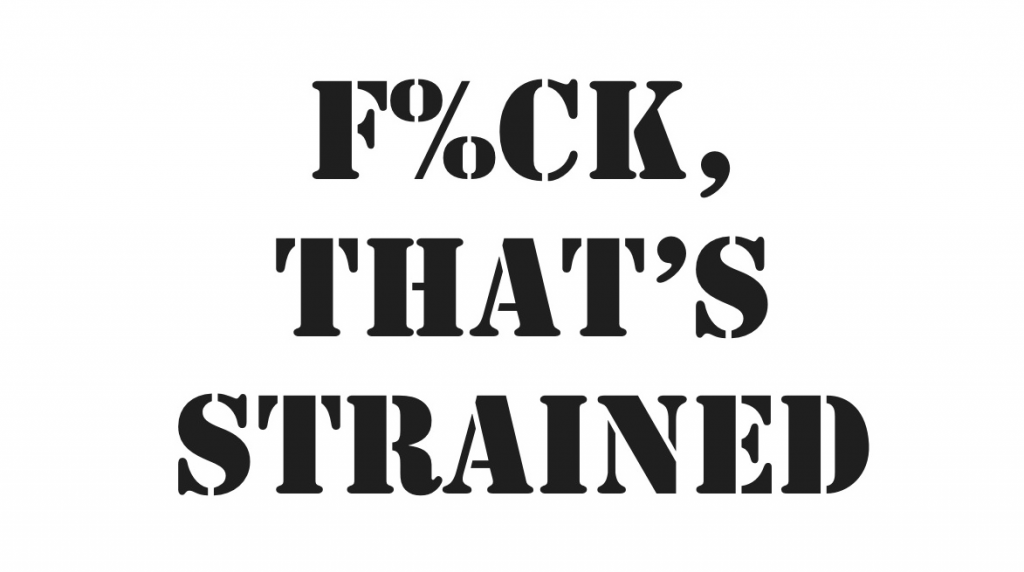 Greek yogurt is yogurt where the finished yogurt is strained, removing the liquid whey, leaving a yogurt that is creamy and higher in protein than traditional yogurt. Since there are no rules as to what can be called Greek yogurt, some manufacturers have taken to adding ingredients, such as the highly controversial Milk Protein Concentrate (MPC) or even corn starch to achieve the same texture and protein as traditionally strained Greek yogurt, but for much cheaper. 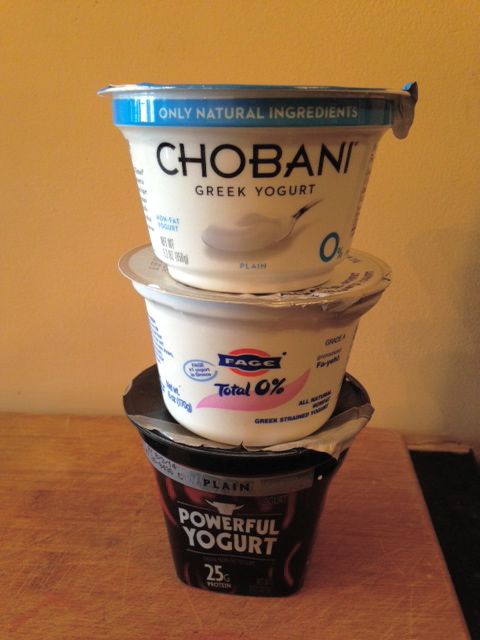 As we said, the dairy aisle is packed with Greek yogurt. So for our purposes, I chose to look only at three brands: Fage and Chobani, arguably the most popular brands of Greek yogurt in the U.S.  (Also, Fage actually is Greek yogurt, and Chobani stays true to the Greek-style.)

I also chose Powerful Yogurt because it’s new, and because their marketing fascinates me.

Quick Digression: Powerful Yogurt, aka Brogurt (I swear I don’t make this stuff up.)

The newest addition to the Greek yogurt lineup is Powerful Yogurt. Powerful Yogurt is marketed to men, because…well…obviously all the other yogurts are too…girly? Whaaat?

The advertising campaign includes black packaging, with an icon of a bull. (manly). And of course, the hashtag: #findyourinnerabs.

“The first in the U.S. to design a dairy product for the needs of active men. Why did we focus on the male market? As guys, we had spent years wondering why dairy companies were overlooking half of the U.S. population: men.

Research showed that dairy products were an ideal, healthy source of protein that could be a filling, satisfying and high- octane component of the male diet, but none of the products on the market were designed for a guy’s health and energy needs. After countless rounds of taste testing, we designed Powerful Yogurt to have more protein than any leading brand (21-25 grams per serving), with a 50% larger serving size to keep active guys fueled and satisfied.”

After “countless rounds of taste testing,” they made the package bigger, so the yogurt has more protein.  And is obviously more virile. (I guess size really does matter.)

One interesting fact about Powerful Yogurt is that they have added a couple of additional probiotics, including Lactobacillus Rhamnosus:

“Lactobacillus rhamnosus is a facultative anaerobic lactic acid bacterium and is frequently isolated from the human gastrointestinal mucosa, starting in the mouth, of healthy individuals. It is also present in the female vagina and urinary tract.”

Back to our Comparison

Looking at the plain flavor first, each of these popular brands has limited ingredients—milk and live cultures.  Good start! Let’s look at the macros now, paying special attention to that protein, ‘cause we do love that protein!

Why the difference?  It’s less complicated than you would think. It boils down to container size. Chobani is 5.3 oz., Fage is 6 oz., and Powerful Yogurt is 8 oz.  So basically…they are all delivering the same thing when it comes to macros.

As far as taste, for me, Fage is definitely the winner here. It is the most authentic, with the creamy tart flavor of real Greek yogurt. Chobani is a close second. Powerful Yogurt has more of a milky taste, but I know some people definitely prefer that to the tartness of more traditional tasting Greek style yogurts.

What about the flavored yogurts?

Again—all have around the same macros, and ALL have a longer list of ingredients., including sugar and corn starch. Both the Powerful Yogurt and the Chobani 100 had sugar, corn starch and stevia. I was particularly disappointed in Fage, since, especially in its plain form, is definitely the most genuine on the list. But it seems that once the yogurt manufacturers join the flavored yogurt game, they all sold their souls to the sugar gods. All were intensely sweet, lower in protein, (largely because of the need to make extra room for the fruit and the thickeners) and much higher in carbs.

Fage’s Fruyo was definitely creamier, and tasted the most like actual strawberries, with Chobani a close second. Chobani 100 and Powerful Yogurt were really sweet, and tasted less like real yogurt or strawberries.

Is having a little sugar, corn starch, and stevia in your yogurt going to kill you? Nah. Will it interfere with your macros? Possibly.

The potential problem is that yogurt is something most people eat as a healthy choice.  In a society where manufacturing food is big business, sugar has moved from treat to staple. (TWEET THAT SHIT!)  And packaged foods, including flavored yogurts, tend to be loaded with sugar. In fact, packaged foods are scientificallyengineered to make us want more sugar, and are sweetened so that our taste buds actually become accustomed to the added sweetness. (Don’t believe it? Stop eating sugar for a couple of weeks. Then eat a piece of fruit. It will taste sweeter!) Those of us who already feel like we become “addicted” to sugar—or at least are prone to having problems stopping once we start with sugary foods—seem especially vulnerable. So why turn a healthy food into a sugary food? (TWEET THAT SHIT!)

What are the choices if you don’t like plain yogurt?

Why not add fresh fruit to your yogurt? Add a teaspoon of honey or pure maple syrup, or even some toasted coconut, or a tablespoon of granola, you would still have less carbs, and none of the added sugars of the packaged variety. And you would maintain the original amount of protein! 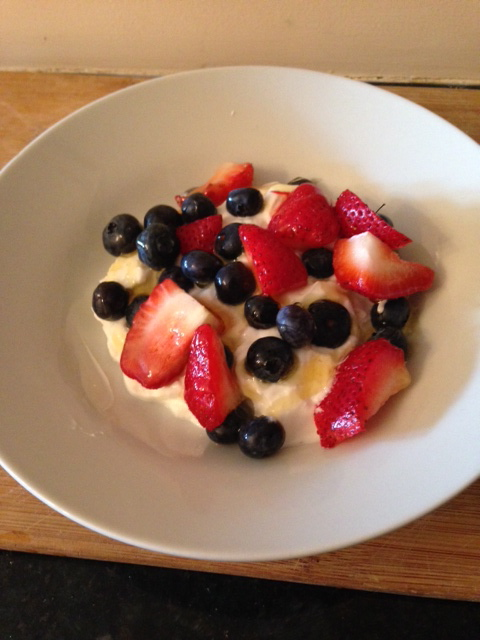 No doubt that Greek yogurt is healthy in its truest form. I challenge you to eat your Greek yogurt unflavored for one week. At the end of the week, you’ll likely have saved enough calories and carbs to treat yourself to Schmackary’s!

Let’s have yogurt for lunch, and save sugar for dessert, shall we?

What do you think? Can you take the plain Greek yogurt challenge? (Is that a brogurt in your pocket or are just happy to see me?) Drop a comment below and let’s discuss!