Why One Leg? A Simple Understanding of Single-Leg Training

“Take your free hand, put it on your side, and check out those sexy abs!”

I told this to a Superhero Strength class at MFF today, during a set of Suitcase carries with a handful of rows thrown in.  Walk, row, walk again.  It’s a rock star combo that Coach Fury and I thought of for this current round of classes.  I love inviting Ninjas to “check-in with their abs,” essentially providing their own kinesthetic feedback while moving.

When one-arm is holding a weight, the opposite side obliques are doing all the work.  Just like this: 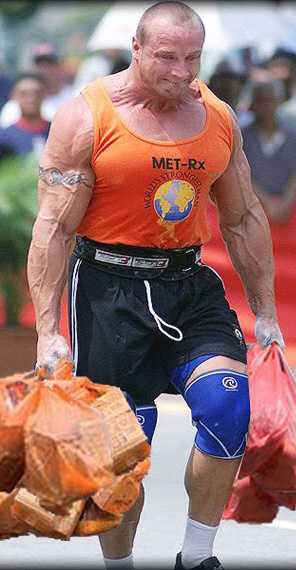 Grocery shopping is the perfect reason to get a strong carry.

While the load in the hands has an influence on what’s working, it’s matched on the bottom by an equal, and arguably more important set of reactions.  Every time our foot hits the ground, we enter this magical place called “stance.”  Stance is magical because there is a distinct difference between how our body works when we’re on two feet, and how we create movement on one foot.

When we’re on two feet, we’re pretty damn balanced.  On one, not so much.  So, when one foot leaves the ground, what we first need to do is not create movement, but resist it.  A group of muscles called the lateral subsystem kicks into gear, keeping our legs, hips, and spine in place. 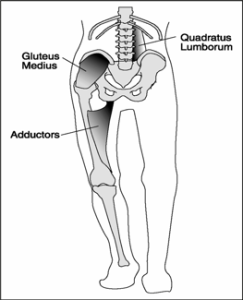 When we’re on one leg, these muscles keep us sturdy and standing.  It’s not that they aren’t working when both feet are on the ground, but they have a lot more to do when we’re doing asymmetrical or unilateral exercises.  A primary goal of strength training is to involve as many of our muscles as we possibly can, and so it would behoove any of us to include a balance of bilateral, or two-leg, and unilateral, or single-leg work.

Where we start including that single leg work is important, as it’s essential to set a foundation of success.  We often begin with the “simplest” of single-leg exercises, the split squat, and decide to progress from there.  Here’s the split squat where most people think to start:

There isn’t anything wrong with starting there, provided that you do it successfully.  Thing is, how many people can start with split squats and really nail the hell out of it?  Let’s be honest; it’s a far more challenging exercise than we give it credit for.  Rather than starting there, I love when we start somewhere simpler.  What’s simpler than moving up and down?  Not moving at all!

Performing common exercises as half-kneeling variations can have an almost instant impact on our ability to “balance” on one leg, and it’s as simple as nailing the set up.  Let’s take a look at three of my favorites, the shovel, the chop, and the lift.  For all of them, we’ll be moving across the “open” hip, that is, we move down towards the knee that is on the ground.

The half-kneeling shovel is my favorite place to start, for two simple reasons:  You can perform it nearly anywhere, as it doesn’t require much equipment, and we’re not dealing with any force vectors other than gravity.  It’s a great place to begin your half-kneeling, and single-leg exercise, journey.

Once the shovel begins to feel comfortable, move on to the half-kneeling chop.  It requires a cable station or a band, and while there’s a new external force from the cable, it will feel mildly supportive throughout the movement.  When setting up, it’s important to make sure we begin from a dead start every time.  Can you control that weight through the start for every rep?  Try out the chop:

Pulling down against the chop provides a certain degree of stability, and when you’re ready, move from the chop to a half-kneeling lift.  The lift requires that our core creates the stiffness necessary before lifting, so it’s considered the most challenging of the three.  The same rule from the shovel and chop apply:  Move over the open hip, and be sure to use a dead start every time.  Here’s a half-kneeling cable chop:

The half-kneeling shovel, half-kneeling chop, and half-kneeling lift are all great core exercises with one big shared benefit:  They improve single leg stance, and therefore improve our ability to train on one leg.

Remember, the goal of the workout is to involve the most amount of muscle possible.  Single leg training is a great way to do this, but if we’re not comfortable doing our split squats, lunges, or single leg deadlifts, are we really going to be inspired to do them?  Not a chance.

Improving our ability to perform single leg work can be as simple as including a half-kneeling exercise prior to your single leg exercises:  That’s my absolute favorite way to include both “functional” core work and well-performed single leg exercises.  Performing 5-6 reps of a shovel, chop, or lift, followed by 8-10 reps of split squats or reverse lunges is one of my favorite pairings ever.

When you include half-kneeling and single-leg work in your workouts, remember one thing:  Execution is everything.  Keep it slow & steady.  Maintaining movement integrity is key the whole time.  Keep it beautiful to reap all the benefits.