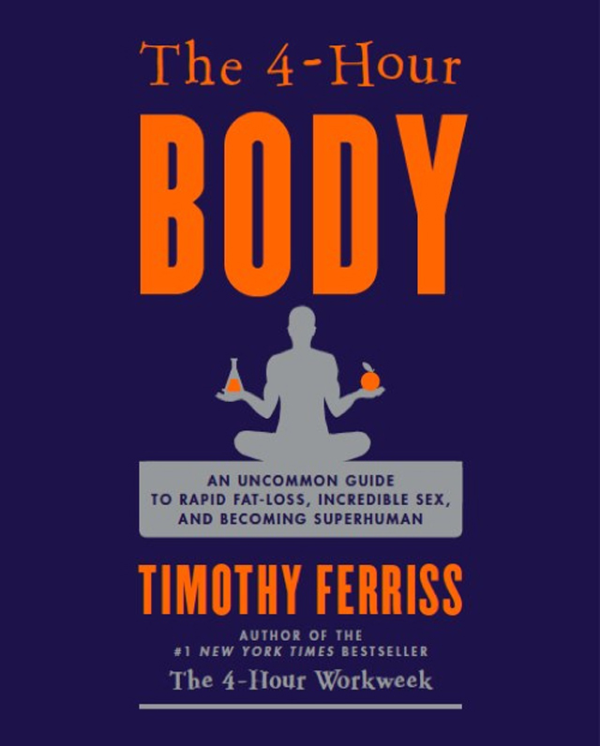 Tim Ferriss, the business expert who wrote the now ubiquitous 4 Hour Workweek, has stepped into the world of health and hotness.  As readers of his first work know, this isn’t exactly a wild departure: Ferriss made his millions creating, running, and selling a supplement company.
Feriss’s book is EPIC, clocking in around almost 600 pages.  Happily, it’s split up into a number of smaller books addressing common goals like fat loss, muscle gain, and optimal sexy time.

Things I Liked:
-Ferriss is very entertaining writer and it’s a very enjoyable read.
-Ferriss interviewed a LOT of awesome people from the world of training and nutrition: Gray Cook, Brett Jones, Mike Robertson, Dave Tate, Mark Bell, Joe DeFranco, John Berardi… the list goes on.
-He understands the value of the FMS and the beauty and genius of the kettlebell.
-I GENUINELY appreciate his enthusiasm and his willingness to look at VERY outside the box approaches to achieving his goals.

Things I Didn’t Love:
-He doesn’t believe in the law of thermodynamics.  Dude.  Seriously?  Even worse, if you’re not up on the research, he makes a pretty compelling argument for it.   (Mark sighs heavily and prepares to explain the calorie in/ calorie out formula to a new batch of humans…)
-While I LOVE that he plugs the FMS, I’m not a fan of self screening.  I know that Cook released a book called Athletic Body In Balance which has a self screen in it. I’ve read it, and again, hooray for introducing people to movement quality.  However, as Brett Jones said while I studied the FMS under him at my certification, “Self screening is like self surgery.”  Nothing replaces a trained, objective, OUTSIDE eye.
-While there is some interesting stuff in here for sure, there’s not going to be much revolutionary for training and nutrition junkies.  That said, to be fair, he’s writing for the general population, so this is totally understandable.
-A lot of the chapters start with semi-annoying stories that usually go something like this: “So there I was, finishing off a bottle of (EXPENSIVE FAMOUS WINE) and getting ready to go (EXTREME SPORT) with (NAME OF FAMOUS YOUNG WEALTHY ENTREPRENEUR), the inventor of (NAME OF INTERNET WEBSITE) and the next thing I know… I’m on Richard Branson’s private island.”  I’m exaggerating of course… but not by much.  I know he’s not trying to brag (…I think), but it got a little bit tedious for me.

All in all?:  In spite of myself… I really did enjoy it.  And while I personally find no compelling reason to disbelieve the law of thermodynamics and consequently am skeptical about the elements in the book where I have less expertise, I see a little bit of my own ocd “life is a big experiment, what if I tried THIS?” passion in Ferriss.  I also appreciate his introducing of a lot of cool training info that the general population may not be hip to (FMS, kettlebells, max strength training… even the Arthur Jones HIT stuff is at least going to expand the horizons of the Flex Magazine crowd).  I think if you’re looking for an enjoyable read, this is not a bad book.  I do however encourage you to really make sure you don’t buy into everything you read.  Then again… I guess I could put that caveat to any book.