Stop fighting your chair and Stop, Drop, and CRAWL, by proud American Kyle “The Beast” Langworthy

Stop fighting your chair and Stop, Drop, and CRAWL, by proud American Kyle “The Beast” Langworthy

You’ve got low back pain – knee, ankle, and neck pain? You can’t breathe very well and you might be experiencing a lower sex drive than normal? Hmmm…Stressed? And can’t sleep, huh? Oh really…you say you did what? Wait a minute, hold on…you say you did what?! You say you think you may have gotten into a fight? Wait, seriously?! You got into a fight with a chair?? Really? A fucking CHAIR? …AGAIN?! #facepalm

* Note – We’re not talking about a literal fist fight. But that this person sat down on his or her lil’ tushie for waaaaaaaaaay too long and is now kinda sorta allllllll sorts of fucked from it. This guy, however, didn’t make it out alive. Rest his lil’ soul.

This isn’t an uncommon conversation to have with some of my desk jockeys and pencil pusher-type Ninja faithful during an ordinary week. In all actuality, I probably have this conversation or something of the sort at least once a day, each time tallying another victim to the list of unfortunate chair casualties. The many health complications of prolonged sitting and immobility it creates has become an unfortunate commonality these days. Year after year, only worse with time, prolonged sitting is putting more and more people into Physical Therapy offices and hospital beds than ever before. Additional research continues to roll in, undoubtedly proving the reasons we shouldn’t spend so much of our lives sitting. That is, unless you really like death. Lolz…but I’m kinda not kidding. To some, the correlation may be scary and a bit extreme, but it’s a valid one. Countless studies have linked excessive sitting to shorter overall lifespans.

Biologically, the act of sitting is literally killing us.

We are not designed from an evolutionary perspective to NOT MOVE for hours on end (most people totaling an average of 8-12 hours of immobility per day! …Holy fuck, that’s a lot of not moving – my dick might have just gone limp from thinking about it). It just so happens that the Nervous System of all living species was evolved initially as a means of to get us from point A to point B, aka the of objective movement. The Nervous System, being a master governor of sorts for motor control and sensory intake has since then profoundly developed into the all-encompassing super highway of communication and information systems that continues to keep you alive and thriving like a badass. This central hub or broadband network is subdivided into two main components, the CNS or central nervous system (your sexy brain!) and the PNS or peripheral nervous system (your spinal cord and nerves), both of which act together as superheroes in tandem (like Batman and Robin or Brian Patrick Murphy and me). 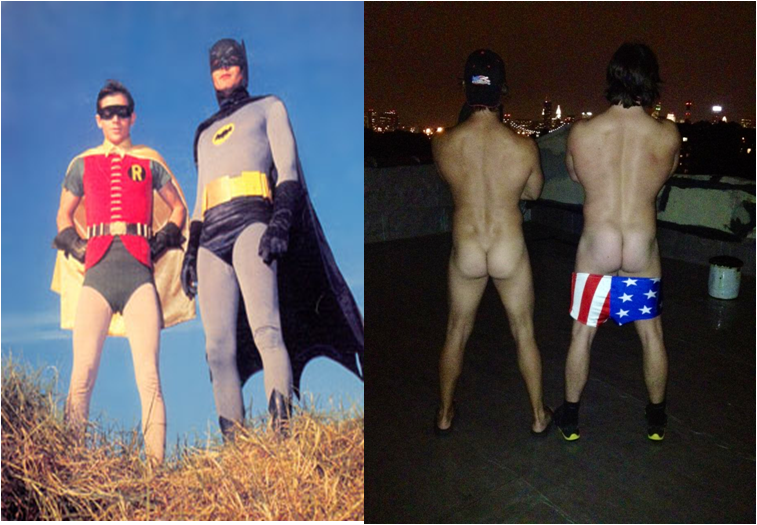 BAM! 1,000,000 Awesome points awarded to me for my first official Batman reference. #winning. Also, Brian and I look goooooood, right?!

Furthermore, the nervous system is then subdivided into conscious voluntary abilities of control (the somatic nervous system), and subconscious involuntary abilities of not-so-much control (autonomic nervous system), and then hardwired with various input sub-systems that make up your entire experience as a living organism. For the purposes of this article, I’d like to specifically focus on one of the systems that is arguably most negatively affected by prolonged sitting: the vestibular system.

The vestibular system is kind of like your subjective reality system; a hugely influential component of the overall sensory happenings that have helped shaped you into the person you are today. Tim Anderson and Geoff Neupert, authors of the book Original Strength: Regaining the Body You Were Meant To Have, both agree that the vestibular system is one sophisticated mother f*er! The vestibular system includes your sense of self, your sense of experiences, your balance, your posture, your coordination, your ability to hold your head up and maintain your gaze with the horizon, your ability to learn, basically your everything!

The vestibular system is also the first system to develop in babies (a la when you’re a tiny little fetus ball and you’re swimming laps inside your mother), and is considered the foundation system upon which the rest of the nervous system is developed. Almost all of your internal working systems are routed through your vestibular system first. This includes every single muscle fiber in your body (especially the core and neck, which we’ll get to in a second), your proprioceptive system (your inner sense of self), emotions, hormones, visceral functions, etc.! Basically, the vestibular system is the SHIIIIIIIT. Unfortunately, most members of the adult population have got totally jacked or malfunctioning vestibular systems. Numero uno reason as to why? Wanna take a guess? Yep! Sitting. Too. Fucking. Much. ALL. THE.  FUCKING. TIME.

When we sit for hours on end without exposure to the wonderful medicine that is movement, we are actually down-regulating our ability to feel and experience life in the way that we were intended. Long doses of sitting (especially in bad positions such as slumping) do really bad things to our hormones. Even after sitting for only a mere 10 minutes do our brains reactively up-regulate nasty glucocorticoids and accompanying stress hormones while also simultaneously decreasing fun naughty sex hormones such as testosterone (thus challenging the very reason for your biological existence, which is to make lots and lots of babies…really cute ones for me to play with. Another article for another time). You see, when we sit and don’t move for extended periods of time, nature acts to take us out, to kill us! We’re no longer relevant to our primary function, procreation. Humans are a nomadic species, designed to move and keep moving, motivated by a primitive reaction to escape danger. Stagnancy is almost like poison for us and if we were to have sat on a chair in the past, we would have probably been eaten by a dragon. Our biology follows the “move it or lose it” principle and thus we are unable to use certain important input systems to their fullest abilities when we become sedentary. Add this biological principle to the many countless movement impairments (shitty movement compensations brought on by lack of mobility or faulty motor control) that I personally see on a daily basis and we’ve got a situation with a lot of potential for betterment. So how can we change this? How can we get better?

The answer: By getting out of our chairs and getting back to moving on the floor again: by CRAWLING.

From a developmental perspective crawling might be one of the most useful movements available to us. Most evolutionary theorists have hypothesized that humans were once quadruped animals (though the vestibular system was obviously not quite as developed as it is today). The development of the nervous system as we evolved into a bipedal (standing) species depended on the neurological input that was acquired through countless years of sensory-environmental exploration and the nourishing interaction of left brain/right brain coordination that crawling provided us.

Without crawling, we would have never been able to achieve a feat such as standing up vertically and balancing our huge ass heads over our bodies (watch a baby learn to walk, you’ll see what I mean). The vestibular system primarily allows us to take this top-down approach of balancing our heads on top of our bodies, by utilizing the benefits of crawling. It ties the core and neck muscular to the rest of the muscular body, via new neural pathways and new multi-articular myo-fascial meridians and connections (that’s a fancy way of saying that our bodies became “one” or tied together and then became upright via newly laid interconnected tissues and brain pathways). Neurologically, using opposite limbs (contralateral) at the same time and moving them across the body like in crawling patterns is deemed as “brain-candy”, reinforcing the cross-linked core musculature and increasing the efficiency of our vestibular system’s ability to “tight rope walk our heads on top of the rest of our body”, something only bipedal humans and primates can do.

Due to our uncanny ability as productivity whores to work 1,000 hours a week in a chair, our vestibular systems become frail and faulty, like an undeveloped toddler that is just beginning to walk (or better yet, an inebriated me after a night out in Manhattan drinking with my bros). The primary reasoning for this is the fact that we stop moving our necks and we segmentally adapt into horrible postures while sitting. We glue the tissues of our butts and hip flexors together while effectively turning the volume down on our core strength and stability. Add this to the fact that we’re not biologically wired to be immobile in ANY position for a long period of time and you’ve got a recipe for disaster.

Crawling lets us explore our environments by allowing us to control our neck/head coordination while automaticallyreinforcing cross-diagonal movement patterns, which are great for the core and stability of the spine.

Crawling also helps develop parts of the brain that increase social and communicative skills. Studies show that babies that skip the crawling phase of development often end up with undeveloped parts of the vestibular system, including visual-spatial skills, balance coordination, and impaired socio-emotional tendencies, to name a few. All in all, it seems crawling is kinda the most awesomest exercise of primitive and developmental times. Maybe it’s time we brought it back and did it more often? BABY SAYS YES!

The main point here is that we should be more like babies and animals and return to our more primitive-developmental movement patterns such as crawling (and other forms of Developmental Neuromuscular Stability, or DNS for all you trainer geeks out there). Crawling will allow us to move better but it will allow us to enjoy our lives more, the way our lives were supposed to be lived.

I challenge each and every Ninja out there this week, especially if you’re dealing with some tight tissues or feeling a little stressed out, to take 20 minutes out of your day and just get down on the floor and crawl around and BE AWESOME. Use your imagination. Have fun. Imagine you’re Spiderman or that you’re a mountain climber crawling up the side of a mountain. Maybe you’re King-Kong climbing the Empire State Building. Whatever your imaginary situation, I can almost guarantee you one thing, your body and mind and spirit will most likely thank you for it. You might even alleviate that back pain you were talking about. Spend more time playing like a kid, moving like an animal, embracing your ninja-like crawling skills. Hone them further and spend less time in “sitting fights” with chairs. Of course crawling isn’t a fix all, but it’s definitely a step in the right direction. Keep Crawling, Ninja Army!