Behind the Scenes of an MFF Internship: “The Post-Glitter Renaissance”

The very first day I walked into Mark Fisher Fitness for my internship, I left covered in glitter. Let me explain. I’m pretty sure that for most of you well-established MFF members, this might not be at all shocking, seeing as it is accepted and even glorified as a totally normal experience, nearly an intrinsic way of life as a Ninja (would that be ninjtrinsic, then?). Say you take a Circuit Party class with Landen – you can very well anticipate being lovingly pelted with bullets of glitter fired directly from a toy gun in celebration of your badassery (← not a word). Some of you might even leave the clubhouse downright depressed if you aren’t, in fact, covered in a shimmering mix of sweat and the sparkly stuff. 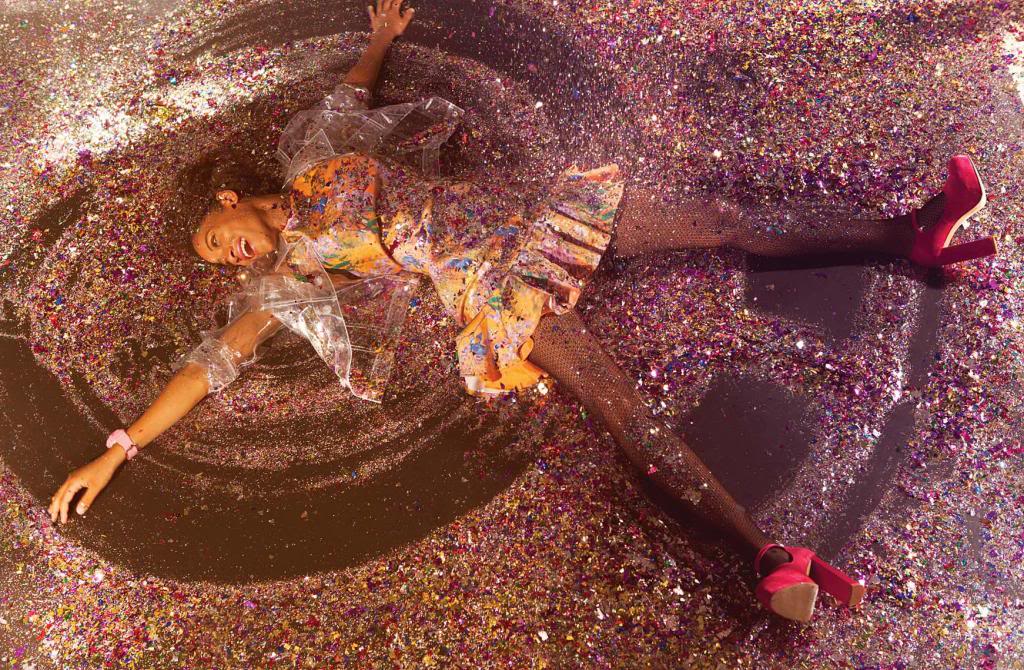 And that’s totally understandable! Who wouldn’t want to be covered in glitter?! It’s almost like wearing a badge of honor that screams “I just killed my workout and have the glitter to prove it.” For Ninjas, simply put, glitter is a way of life. And that glitter is born and bred in the Clubhouse every single day because of the energy and love poured out by trainers, office staff, and Ninjas alike. Sounds “just like every other gym,” right? Even though many of you have come to understand the pure magic that is offered 100% complimentary with every membership package at MFF, allow me to break it down from my point of view and make it relevant to my personal experience as an intern thus far, one shiny speck at a time.

I first experienced Mark Fisher’s mastery years ago at one of MFF’s earliest levels of conception: my personal first entailed sweating al fresco at a boot camp in Astoria Park. For some of you Ninja veterans your first time might have been the inaugural “Snatched” workshop, back when the idea of four sturdy brick walls housing a disco ball and the MFF dream was but a star in the sky. Awwww. Baby unicorns. This is the time-period that I will refer to as B.G.: Before Glitter. Fast forward to P.G. (the Post-Glitter era, or the Unicorn Renaissance if you will), and MFF not only got a Clubhouse of its very own, but it also scored said disco ball. Skip to this past April, I was lucky enough to hop on board with this mind-blowingly (← also not a word) incredible team as one of three trainer interns. So much glory!

The mission: over the course of 6 months, we would have the opportunity to soak up as much personal training information as possible and learn about the behind-the-scenes magic of MFF, the endgame being national certification in something along the lines of Health and Hotness (a clinical term). I speculated that the “Ninjternship” as I like to call it (say that word three times fast) would be an exciting opportunity.

I had no idea at that point how greatly the positivity, camaraderie, and focus on self-improvement (which makes MFF so unique among gyms) would revolutionize not just my health, but all facets of my life.

It all started with my very first MFF class: Landen’s Circuit Party. I quickly realized that this was a “gym” experience unlike anything I’d ever partaken in. Not only because of the trainer’s expertise in fitness, costumery and stand-up comedy (#justlikeeveryothergym), but because of the invigorating effect that they had on my fellow Ninjas. Leaving the Clubhouse after that first class, I realized that the energy and positivity Landen aimed at me in class had really stuck. No, like, for real. Literally, glitter just stuck to my body. I walked to the subway looking like I had rolled around the floor at a cheerleading convention, and as the flecks from the confetti gun sparkled on my skin I couldn’t help but smile. It was a reminder of the hard work that had been done and the empowering community I had just joined.

I can’t be sure, but I would bet that on blocks just parallel to mine, other Ninjas around the city were admiring their sparkle too, and feeling just as inspired and accomplished. It really is a glitter that binds. The more engrained I became in the culture, the more accounts I heard from other Ninja’s and their MFF experiences not unlike mine, and was suddenly in awe of how many lives are being changed on a daily basis due to this unique environment. “OMG”, I exclaimed to myself wide-eyed while swinging a kettlebell in Superhero Strength later that week, “This is more than just a handful of glitter. Being a part of MFF is like taking an entire motherfucking shower of glitter every single day.” Mind. Blown.

The positive and motivating force of Ninjahood sticks to your skin just like Landen’s confetti and pushes you to always be the greatest version of yourself throughout the course of your day – still glistening while on your way to work or to happy hour with your friends – and is what makes this “boutique gym” so unique. And also so addicting. In fact, in that first week of my internship, many of my friends told me it sounded like I’d wandered off and joined a cult. “I sort of did,” I told them. And just like that, I became a Ninja convert. I threw on a pair of MFF-colored glasses and crossed the threshold into my own Post-Glitter enlightenment.

You know how I know how else MFF is like glitter? It is evident in the tightly woven camaraderie of its community. Think about one speck of sparkle. Not so impressive all by its lonesome. Now consider if we multiplied that little guy times a million. What happens? We have a whole bucket of glitter, which duh, is exponentially more useful for celebrating victories and way more awe-inspiring in terms of luminosity. The whole is greater than the sum of its parts. Thank you Aristotle – you genius, you. This is how I’ve come to appreciate our MFF family: we are a Ninja army of glitter. All of us. Staff and clientele alike. One lone person could not make up MFF any more than one speck of confetti could make an entire New Year’s Eve celebration in Times Square. It is a group effort between a million glittering specks of beautiful people who care just as much as the founders themselves. This philanthropy shines through with the outpour of Ninja participation in extracurricular events, like Broadway Baresfundraisers or the Park Clean-Up effort. Whether observing semi-privates or sitting in on business meetings, it has been inspiring to see how hard (and enthusiastically so!) the staff works, to see the countless hours of effort and attention to detail that are put forth to make this culture continually reaching higher levels of greatness.

“Get Better” is not just a one-dimensional mantra useful for hashtagging photos on Instagram – it’s a fleshed-out, permanent way of life.

Also integral to the gregarious union at MFF is the outright love and near obsession that each trainer has for each Ninja, again making it such a unique place to not only train but to create meaningful relationships. The supportive connection we have with one another is that extra factor that holds us all accountable, making us all want to work out, and work out hard. Roxie Hart (also a Ninja when not serving time in the slammer) put it best: “They love me for loving them and I love them for loving me. And we love each other. And that’s because none of us got enough love in our childhood. And that’s showbiz… kid.”

Swinging kettlebells and doing badass variations of pushups is obviously an empowering benefit of becoming a Ninja, but so is the inner strength one develops while training at MFF. In my experience as an intern so far, it has been inspiring to see so many Ninjas not only build up drool-worthy biceps that would make any ex jealous, but most importantly I have seen confidence levels and strong self-images develop within just days of joining. And this is so important, because while the MFF experience is about Health and Hotness, it’s also geared toward becoming a better human in general. I truly believe Ninjas do it better, because we all hold each other to a standard of greatness.

It’s like we’re all members of this secret society of self-improvement, training underground to take over the world with all of the positive characteristics that we pass so generously between one another. It’s fitness for the mind, body, and soul.

Let’s face it, we could all choose to train at a million different gyms city-wide to gain muscle, or burn fat, or nail our next profile pic, or reach whatever fitness goals we have set for ourselves. Would we see the same physical results? It’s possible. But would we have the same overall experience at any other gym? Never. People are drawn to MFF because of its sparkle, its vibrancy, its energy, its magnitude, its sense of community – and because it offers something unique. Just as confetti is reserved to celebrate standout occasions, MFF is reserved to celebrate standout humans. Throughout my time as an intern, the most impactful thing I’ve learned has nothing to do with proper form, or movement dysfunction, or soft tissue work, and everything to do with how MFF is quite simply changing the world, one piece of glitter at a time.