It’s time.  You’re ready to do this.  You want to lose those five pounds that are making you uncomfortable during beach time.  You dust off the gym card and hit the gym.  You start doing cardio for 60 minutes 5 days a week.  BOOM.

At first things are going great!  You’re obviously getting leaner.  You lose 2 pounds in the first week. Awesome!!  Another week and half to victory, easy peasy.

Flash forward two weeks.  WTF?  You’ve GAINED a pound.  This is bullshit!   You up the cardio to 75 minutes.  And you lose another pound by the end of the week.  Whoo!

Two weeks later.  No more weight loss.  What the hell is going on?!

Your body is designed for adaptation.  It’s designed to get good at doing things so it can do physical activity with minimal amount of calorie burning.  Super helpful for life in the jungle fighting lions.  Not so much when you’re trying to get ready to rock a speedo. 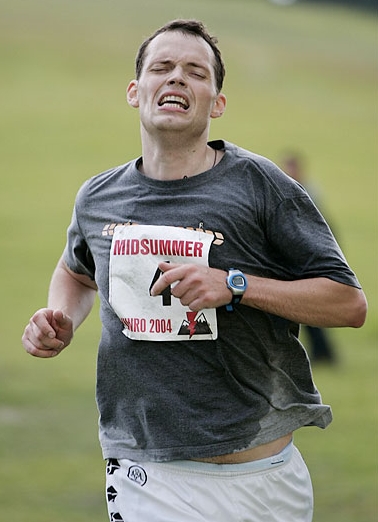 Just not doing as much as you think it is.

Unless you think it’s wreckin’ your knees.

If you’re doing the same thing week in and week out, whether it be the same cardio routine or the same weight workout, you’re gonna plateau.  The body will figure out how to do it in the most efficient manner possible and your fat loss will be severely compromised as the effect on both calories burnt and your metabolism will no longer be as pronounched.  Leaving aside the fact that nutrition is the key driver for fat loss, if you want your training to be effective, you’ve got to vary what you’re doing.

Furthermore, doing the same movement patterns over and over can lead to imbalances even with the best program.  It’s an oft quoted cliche that the best program is the opposite of the one you’re on now.  If you’re really looking for health and hotness results, you’ve got to switch it up continuously.  Beginners can usually go longer with less variety – sometimes as long as 12 weeks.  For the intermediate and advanced, 4 to 6 weeks is a good rule of thumb.  Elite athletes change their program as often as every 3 weeks.

One of the downsides of traditional cardio for fat loss is that, because of its nature, you don’t have the ability to add variety.  You can change the intensity from medium to hard and the modality from treadmill to bike, but it doesn’t allow for the variety of a weight training program.

Again, the importance of nutrition can’t be overstated when seeking the health and hotness dream. However, to maximize the efficacy of your training, don’t just do the same thing over and over for weeks at a time.  Traditional cardio can serve its place, but it’s not gonna be your big rocks for fat loss.  Not only will changing things around be less boring, but it’s better for your joints in the long term and you’ll get better results. Switch it up kids!  And if you need help figuring out what to do… I know a team of ninjas that can help.