And now… I give you…

Can anyone explain cleanses to me?  As always, when I ask my beloved readers for their perspective, it’s not rhetorical.  So for realz; if you have some rationale as to how they work, I’m totally open to hearing it.  Right now it seems to be a socially acceptable way to starve yourself for a few days under the guise of holistic cleansing. 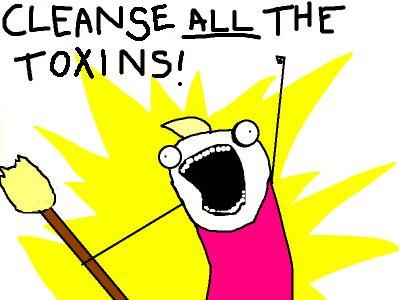 What exact toxins are you getting rid of?  Does anyone know?  Also, can anyone illuminate the biochemical processes by which these toxins leave your system? If eating food leaves you full of toxins… perhaps we should seriously consider the quality of the food you eat?

I’m totally open-minded, but at the moment I’m pretty sure when you do a cleanse you’re intellectually justifying your emotional desire to do a few days of crash dieting.  Loyal readers know I’m all for the use of periodic fasting, but days at a time seems dicey.  Particularly for ladies who don’t seem to always do well even with shorter fasts.  By no means am I saying that’s wrong.  It may even be fucking awesome!  But let’s call it a “starve” and not a “cleanse.”

Here’s a random thought; let’s talk about the menstrual cycle!  MFF SuperNinja Stephanie Estep brought up this great point the other day on an FB thread:

“I just read a chapter in Female Body Breakthrough (recommended by Mark Fisher) about [the menstrual cycle].  It says exercise will help boost your serotonin and help lessen cravings but she also says to be careful because it’s the week where you’re most likely to injure yourself because of joint laxity and lack of focus. And stay away from the scale because this is when we bloat and have mood swings and a bad weigh-in can make an already shitty week even worse and lead to a hangry binge! Have a super chocolatey protein shake, wear a really good, supportive sports bra and hang in there!!!!:)”

Thanks Stephanie!  Good lookin’ out!

Spending your fitness time sitting with a rounded spine and flexed hips is probably not the best idea for most folks who sit too much anyway.  If this activity isn’t balanced with other activity that balances it out (specifically work for the often underactive glutes and upper back), it’s gonna be a bad scene.  Particularly if someone is spinning 5 to 6 days a week.

Like many endurance activities, people who love love LOVE spinning can often get addicted to the “high” of the endorphin rush.  This can sometimes allow them to justify doing something that’s obviously breaking their body down because it’s “exercise.”

Again, everyone is different.  Some folks will do just fine with spinning as their primary activity, but those who sit at a desk 8 hours a day should be mindful.  Particularly those who tend to lack mobility and be on the tighter side to begin with.   (In Thomas Myers Anatomy Trains lingo, I’m speaking to fascial “vikings.”)

I really do get the appeal; spinning can be super fun!  They play cool music, there’s a sense of camaraderie, the thrill of physical exertion, etc.  I would just lovingly suggest folks avoid jeopardizing their long term quality of life by cementing their postural dysfunction.

Make sure you’re foam rolling, doing mobility work, maintaining movement competency, and balancing out your spinning with activities that will keep your body in balance.  (And if you’re not sure how to determine that, you can always find someone to take you through a Functional Movement Screen).

People often ask me what’s the best booze to drink when looking to get leaner.  And while you might imagine I’d be strictly anti-alcohol while looking to lose some lbs, I’m not totally against it.

Counter-intuitively, I don’t really think moderate drinking is necessarily a problem while leaning out IF you can do it moderately.  There’s no reason you can’t have a glass of wine here and there while pursuing greater levels of hotness.

(Needless to say, reader, know thyself.  I live in Manhattan.  I don’t know a lot of moderate people.) 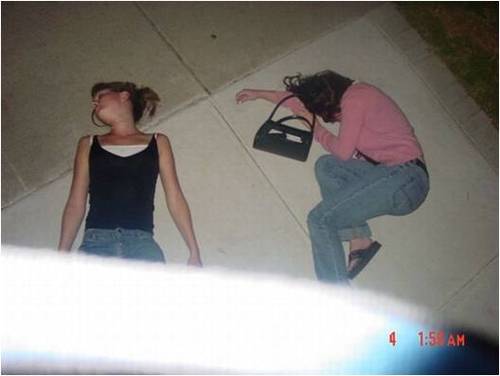 Prrrrobably not nailing their fitness goals.

As a general rule of thumb, just avoid mixers with calories (soda, juice, etc.) and go with straight booze or booze mixed with non-caloric mixers (club soda, diet soda, etc.)  Since most servings clock in around 100 calories, have a drink you like instead of having one you hate to save yourself 20 calories.  Even Guinness, the meal replacement of beers, is only 160ish calories per pint.

I wouldn’t be overly concerned with a minimal calorie difference as it won’t matter until you’ve had several drinks.  In which case… have four instead of five.  And then just admit to yourself you’re kind of saying “fuck it” by having that much booze.

To be totally frank, the biggest problem drinking poses for fat loss is that if you actually get drunk, you’ll tend to eat shitty food, sleep poorly, and order shitty food when you wake up hung over the next morning.