a guest post from one of our most esteemed SuperNinjas, the inimitable Stella Kaufman

I came to Mark Fisher Fitness with the simple hope that I could break through a weight loss plateau that I had been at for six months.  A little cardio. That’s all.

I’m not gonna lie. I looked at the MFF logo online, and I felt pretty sure that I was not going to fit into that scene. I was intimidated, to say the least. I was worried about being too old, too heavy, too weak to keep up with whatever was going on there.  I also remember reading that MFF referred to everyone as ninjas, and feeling certain that one look at me would change all that.

Little did I know that I was about to embark on a journey that would cause a palpable shift in the cosmic order of the universe as I knew it. (Too much? I know, but I swear it’s true.) I was in for a crazy rainbow unicorn ride that was to teach me more than I could have ever imagined,

It all started when I read the Snatched in 6 Weeks eBook. One thing stood out:

For the record, I confess to being a skeptic when it comes to promises and guarantees. All I could think was, “This guy doesn’t know anything about me. How does he know what will work for me? More protein? More calories?  Oh yeah, I hope he’s up to this challenge! (Insert cynical laughter.)  Lofty declaration, Mr. Fisher. Game. On.” Though I was doubtful and fearful, I ditched my attitude and made the commitment to follow the program exactly. Whatever happened, I was determined not to give anyone, including myself, a reason to doubt my efforts.

I plodded along, leaning against the wall for balance during split squats, praying that I would not hear the word “burpee” any time soon, and all the while sweating like a whore In church. The fact that I was twice the age of everyone in there was the least of my problems.

Ninjapiphany #1- Everyone Loves a Good Mindfuck

It was at that point that I realized that, at its best, my subconscious is an all-powerful tool; at its worst, it is a sabotaging enabler. My body can’t do it alone. I realized that my journey to fitness glory could be about so much more than exercise and nutrition. How much more was up to me.

I decided to make my mind my bitch. I enrolled myself in “How Stella Got Her Groove Back 101” and proceeded to combine what I was getting from my MFF training with training for my subconscious mind. I read Joseph Murphy’s book, “The Power of Your Subconscious Mind” as my textbook. I mindfucked myself into believing I was strong.

Each day I felt a little more courageous (maybe one percent?). I stepped outside my comfort zone. I was done with self-imposed limitations, middle-age complacency, mediocrity and the C word (that word being can’t – please try to focus).

Sometimes, I made mistakes. I overestimated what I thought I could do in class. I underestimated what I thought I could do in class. I made wrong turns. But somewhere along the way, I discovered that when I make mistakes, it says something about where I am at that moment. What I learn from those mistakes, and what I do with that knowledge, speaks to who I can be. The truth is, I admit to being surprised at the amount of self-discovery that comes from failure! I learned so much more from my mistakes. (Thank goodness, because really, I make a lot of them.) 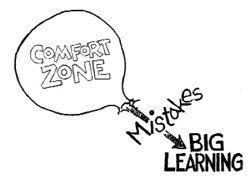 I always knew that losing weight and getting into better shape would greatly improve my mental well being, but I had no idea to what extent. I did not know that there would be moments where I would actually hear the hallelujah chorus in my closet. But the truth is, I discovered that it really isn’t just about how you look, it’s about feeling comfortable in your own skin. Being able to move well, to balance, to perform physical acts of strength is essential to a holistic feeling of health (ok, and hotness). I guess I always believed that being “fit” was the icing on the cake, when, in fact, it’s the cake!

Finally, I became aware that while the ambience of where I train isn’t everything, it has definitely helped to inspire me on my fitness journey. After these last six months at MFF, I don’t want to go back to a traditional “gym” setting. Ever. Getting better, getting stronger,  is just way more fun in a clubhouse, where unicorns graze under rainbow skies, teachers wear costumes, and ninjas of all ages play with kettle bells and tickle dragon balls together. Just knowing that I can have that…and get better…every day?