Return On Investment: How to Measure Your Life ROI

You’ve heard about return on investment (ROI), but what about taking stock of the ROI in your life? Wheels gives us some guidance on how to look at the choices we make, and how they affect our life’s ROI.

A version of this article was originally produced for the Formation Strength community.

You’ve likely heard the term ROI thrown out around money, but taking this concept and applying it to our energy and the choices we make is a WAY BETTER use of the concept.

This definition is taken directly from Investing Answers:

Return on investment (ROI) measures the gain or loss generated on an investment relative to the amount of money invested. ROI is usually expressed as a percentage and is typically used for personal financial decisions to compare a company’s profitability or to compare the efficiency of different investments.

The return on investment formula is:

If an investor buys $1,000 worth of stocks and sells the shares two years later for $1,200. The net profit from the investment would be $200 and the ROI would be calculated as follows:

Are You Getting a Good ROI on Your Life Choices?

Considering potential ROI when investing money is super smart because it would NOT be smart to invest in something that we know would give us a negative ROI.

In fact, you’d think someone was a little loose between the ears if they knew something was going to give them a negative return but they chose to do it anyway.

Yet, a lot of times we choose things that will give us a negative return in life without batting an eye.

An example: how many hours a day do you spend on social media?

Do you feel uplifted or connected or inspired afterward? Do you feel drained or worse about the state of the world or like you’re in the comparison trap afterward?

If the answer is the latter, why are you choosing to invest your time there, and what is the ROI?

The ROI is probably feeling anger, or anxiety, or thinking you aren’t doing enough or that you aren’t where you want to be. Those thoughts turn into feelings that turn into moods which dictate your behaviors and how you show up in the world. Negative ROI in small choices permeates into everything else. It’s doesn’t stay contained.

It’s not just social media and obvious energy suckers. There is a ROI to everything we choose. It’s things like the music we listen to, what we eat, who we hang out with, our commutes, our thoughts, how much we drink, and the list goes on and on.

As I’ve gotten older, I’ve really started considering this concept with things like drinking or other party enhancing treats. When I was a younger, I could pound drinks without considering the ramifications of the next day. Now, if I have anything over 2 drinks, I know my following morning is shot. 4 drinks? Count me out until noon.

It’s fun to keep the party going, but at what return on investment?

I’ll now ask myself, “is having another drink and feeling drunk for another hour tonight worth feeling shitty for an additional 2-3 hours tomorrow?”

If the answer is no, and I’ll lose 2-3 total hours the next morning to have 1 more hour of fun, I won’t have another.

How to Measure Positive ROI

On the opposite end of the spectrum, let’s take working out. I have to be completely honest, most days I don’t feel like working out. I’m not someone that is eager to get to in their training session on a daily basis, and I basically live at the most magical gym on Earth.

But, I know the ROI on that 45 minutes to an hour will be positive to the Nth degree.

How do I know the ROI is positive?

I can tell by how I feel after I work out. Not only because of the obvious physical effects, but the endless mental and emotional effects.

Just like the negative returns permeate, so do the positive.

I’ve never left a gym session feeling like I had a negative return on investment. It’s positive 100% of the time. I’ve never regretted spending my time there.

ROI of time and energy and attention can be tricky because a lot of times it’s the easy or mindless stuff that is fun in the moment but provides a negative ROI in the long run.

And it’s the hard stuff… the stuff that we “don’t have time for” that provides a largely positively ROI in the long run.

Whether you want it to or not, every choice we make has a return on investment. Very small amounts of time can reap largely negative or largely positive returns. It’s up to you to decide if you want kinds of returns you want.

I encourage you to take some time to notice where you are putting your energy and attention this week and see what returns you are getting.

Wanna get the biggest ROI in your NYC fitness pursuits? Schedule a Health and Hotness Strategy Session at Mark Fisher Fitness. 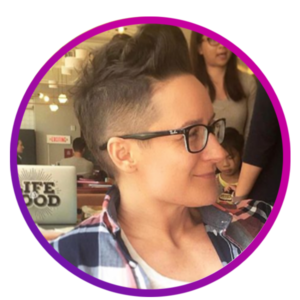 Amanda Wheeler is a Certified Strength and Conditioning Specialist and Precision Nutrition L1 Coach. She is the cofounder of Formation Strength, and a mentor in the peer-to-peer coaching group Strength Faction. When she’s not training the Ninja Army, she is kissing puppies and picking up heavy stuff. You can connect with her on Facebook and Instagram.
Instagram Facebook Youtube Yelp