My glutes are sore from yesterday’s workout.  I didn’t even lift that much weight.  What’s going on here?

The direct lower body training in my workout yesterday was a few sets of kettlebell goblet squats and two kettlebell single leg deadlifts.  You may include the triceps extensions that I did in half-kneeling.  All things considered, it wasn’t a lot of reps, and it wasn’t a lot of weight.  So why am I sore?

Conventional wisdom is that you get sore when you’re doing a new movement for the first time, or making a large change in volume or intensity.  We know that eccentric muscle action, lowering weights, is a more potent mechanism for soreness than raising weights.  Most of us have experienced delayed onset muscle soreness the day after we first squatted or did single leg deadlifts.  It’s normal to get sore, and an indicator that we’ve done something different.  So, how did something relatively normal make me noticeably sore?  (TWEET THAT SHIT!)

I’m sore because it was different.

Squatting didn’t come very naturally to me, so when I began training I got away with compensations that I wasn’t even aware I was making.  It’s lead to some pesky hip and back pain, but also to a greater understanding how our hips move when we squat.  Let’s consider that the majority of the squats that we see come with a noticeable degree of movement through the lower back.  This puts undue pressure on our lumbar vertebrae, discs, and hip anatomy.  Here’s an exaggeration:

This is what I like to call a passive structure squat, where you rely on your bones and ligaments to keep you together, rather than letting hip and trunk muscles do their job.

Instead, our hips shouldn’t be moving nearly as much.  They should remain aligned with the ribcage, rather than rolling out to initiate movement.  Rolling of the pelvis forwards or backwards can increase the likelihood of pain or discomfort, and basically make you hate squatting.  That squat won’t do much for keeping you happy and healthy while you’re moving, and for me that makes it wrong.

Squatting is great in general, and we can make it even better by maintaining alignment between our hips and ribs while we squat.  Here’s an example in a double bottoms up variation:

As you see in this example, there’s far less movement through the lumbar spine.  It can minimize some of the inherent stresses that we see from efficient movement, and it can prevent us from adding unneeded stress as well.  It’s that squat, which allows you to maintain trunk stability the entire time,  which is what made my butt as sore as it is.

As a general rule, you’ll want to maintain constant vigilance against any ‘slack’ muscles while you’re squatting.

Your abs and hip muscles should never rest.  If you’re in the bottom of your squat without abs or an ass, it’s likely that you’re not maintaining a natural curve in your back.  Perhaps practicing some deadbugs can help; Check out Part 1 and Part 2 of my ongoing series about core function.

My focus on precise technique meant that relatively light weights were a challenge, and that resulting soreness reminds me of that difference.  Had I squatted as per normal, a small house would have been lifted, and I wouldn’t feel a difference.  That brings me to your workout.  When was the last time you focused on technique?  I mean really focused on it.  Lighter weights, slower tempos, as precise as possible.  This is exactly how light I went yesterday.  Check out the entire workout on Fitocracy HERE! 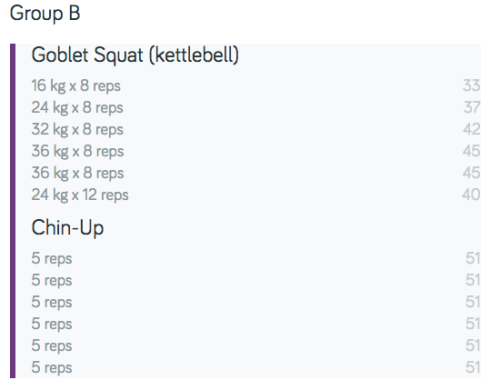 If it’s been a while, have yourself a technique day. (TWEET THAT SHIT!)  Consider your hip movement during your squat, and find out if you can create a more stable position to squat from.  Use a mirror, or a lifting buddy, or ask a trainer for help.  You may engage your trunk and hip muscles more, which will set you up for more sustainable squatting success. Let me know how it goes in a comment, and please share with your favorite squatters!